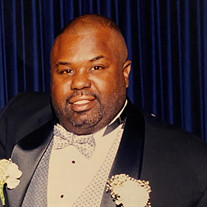 Elwood Robinson, 55, affectionately known as “Barry”, of Bear, Delaware transitioned on Friday October 16, 2020 surrounded by his loved ones. Barry was a proud and loving father, grandfather and son. His demeanor was quiet and private; yet he was a generous and hard-working soul to those who knew him. In his eyes, there was never enough time to rest. His motto was, work hard and play later. Barry was born November 26t​ h,​ to Louise and Elwood “Bunky” Robinson in Chester, Pennsylvania and was reared in Twin Oaks, Upper Chichester Township. Although, Barry was their only child – he was raised amongst his older cousins and a few of his younger cousins as if they were sisters and brothers. While being raised with this group of cousins, he was tenderly known as their “Baby Cuz”. Barry attended schools within the Chichester School District and graduated in the Class of 1982. Barry excelled academically and was also a talented athlete who enjoyed playing football, basketball and baseball throughout middle school and high school. He was recognized for his athletic abilities at the Annual Chichester Athletic Banquets. In 1982, he led the Chichester High School Football team to the winning championship. After high school he continued to play baseball for the summer adult Chester Recreation Softball League. Barry was a sports enthusiast and loved his Philadelphia Eagles. During sporting events his nickname was “Thunder”. Barry gleaned his love of music from his father, so it was no surprise that he honed his musical craft and became a gifted musician. He played the drums and tuba in the Chichester Middle School Band. After high school, Barry attended Widener University where he matriculated and due to his resilient work ethic, graduated a semester early with a Bachelor of Science degree in Business Management. Barry was a scholarly student, who strongly believed in the power of education and he instilled these same qualities into his children. He would often say, “I have my degree - you go get yours; nobody can take it away.” Barry was employed by Philadelphia Electric Company (PECO) and Exelon in Philadelphia, Eddystone and Chester, Pennsylvania Generating stations, for 35 years; and during his tenure, he held various positions throughout this lengthy career. He was a member of Local 614 IBEW (International Brotherhood Electrical Workers) and held several positions within their local union. He labored untiringly at the electric company, but always felt the need to still pursue his youthful dream of having his own business. When an opportunity knocked and the door opened, Barry took advantage of that opportunity to make his dream a reality. Barry believed in making an honest living for himself, his children and parents. When Barry envisioned his business dream, he was careful to ensure his research included a thorough evaluation, from start to finish, of all the pertinent facts and characteristics of running a successful business. These prospects are what eventually led to his proprietorship of two establishments: B & E Bar and Sharon Hill Bar. Being a proprietor was an opportunity Barry used to build generational means while also providing jobs for neighbors and community. He valued his clientele as he built a legacy of entrepreneurship. On his days off, Barry would put on his “Grill Master” and caterer hat by serving BBQ ribs, seafood, and steak dinners to his patrons and the community. He learned his art and love for cooking at an early age by shadowing his mother. Barry was also a member of two fraternal organizations, Prince Hall Masonic Order - Linwood Lodge Chapter 87, 2n​ d​ Masonic District Southeastern Pennsylvania and John A. Watts Lodge, Chester, Pennsylvania. Barry leaves to cherish his memory: his parents, Elwood “Bunky” and Louise Robinson, Twin Oaks, PA; aunt, Joyce Willis, Brookhaven, PA.; his four children: Dionne Kenan (Freddrick) Charlotte, NC; Chanel Purnell (Joseph, II) Bear, DE; Adrienne and Barry Cooke, Wilmington, DE; mother of his children Paula Cooke-Seeney of Wilmington, DE; four grandchildren: Gabrielle, Christian, Caleb, Chanel (Krissy); a special friend Tara Thomas, Sharon Hill, PA.; nephew, Justin Smoak; goddaughter, Janera Handy; lifetime best friends: Frank Colson “Peanut” (deceased), James Colson, Walker “Beetle” Moseley, Jiffy Handy; and a host of cousins and other relatives.

Elwood Robinson, 55, affectionately known as &#8220;Barry&#8221;, of Bear, Delaware transitioned on Friday October 16, 2020 surrounded by his loved ones. Barry was a proud and loving father, grandfather and son. His demeanor was quiet and private;... View Obituary & Service Information

The family of Elwood B. Robinson created this Life Tributes page to make it easy to share your memories.

Send flowers to the Robinson family.