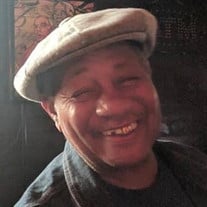 Edward Lee Davis was the son of the late Edward L. Davis, Sr. and Bertha DeShields. Edward leaves to cherish his wife Patricia Davis. Edward was born in Somerset, Maryland and was educated in Maryland. Edward worked at Local 413 until he... View Obituary & Service Information

The family of Edward L. Davis Jr. created this Life Tributes page to make it easy to share your memories.

Edward Lee Davis was the son of the late Edward L. Davis, Sr....

Send flowers to the Davis family.