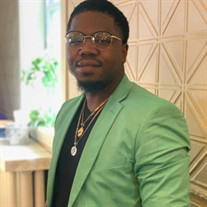 The world became a brighter place when E’van LaMar Dill-Smith’s life began on February 4, 1988 at Crozer-Chester Medical Center in Chester, PA. E’van, affectionately known as “Mooks” to all who knew and loved him, was the youngest child born to his loving parents, Douglas Smith, Sr. and Eva Dill-Smith. He was a bundle of joy from the very beginning when his entrance into the world was just as special as he was. When Eva went into labor, her brother Pete, Mooks’ Godfather, was the only one at home who could drive her to the hospital. He prayed the whole way that Eva wouldn’t have the baby in his car. Upon arriving at the hospital, Pete anxiously got out of the car and walked into the hospital but forgot Eva in the car! Eva eventually made it inside, and her sister, Nurse Melva, took charge of things until Doug arrived just in time to see his baby son come into the world. He was such a cute, lovable, and funny baby that the entire family couldn’t help but spoil him. Mooks spent his early childhood in Chester, but relocated to Claymont, DE. He attended The Christian Academy in Brookhaven, PA, as well as Talley Middle School and Brandywine High School both in Wilmington, DE. Mooks was a loving and thoughtful man, always thinking of others first, especially his daughter Layla, known as her father’s “Stink.” Rarely did he miss any of Layla’s basketball games. He was her biggest cheerleader, biggest fan, and her bestie. Mooks had a nickname for all those he loved – “Hollywood,” “Big Bruh Rockhead,” “My Guy,” “Godfather,” and “Slim,” just to name a few. He was a very punctual person. He would leave you if you were a minute late and let you know, “I’ll meet you there.” He was also very particular. For his junior prom, Mooks told his dad exactly what he wanted to wear, a white suit with a top hat and a walking cane so he could look like Biggie Smalls. He also had Doug chauffeur him to the prom in a Mercedes Benz SUV. Mooks loved going to the beach, eating crabs, and having his sister, Ronea, give him facials. He could spend all day at the beach, labeled each Sunday ‘Crab Day,’ and would always ask Ronea what he could use to make sure his skin stayed smooth and looked nice and healthy. Mooks loved to travel and take road trips. He was also a sports enthusiast, winning the title of Most Valuable Player in basketball and football all throughout school, and an avid fan of the Philadelphia 76ers and the Philadelphia Eagles. Mooks had an extremely special birthday in 2018 when he turned 30 and his Eagles earned their way to Super Bowl LII. He cheered them on while dressed in Eagles green, including a shirt that read 30 on the back and Bird Gang on the front. By the end of the night, he had two reasons to celebrate as he excitedly watched the Eagles clinch their first Super Bowl victory on his 30th birthday! He was determined to attend the victory parade on Broad Street, and Mooks, once again, left everybody and attended by himself. Fly Eagles Fly…Mooks can now fly high with the Eagles! Mooks worked for various companies throughout his life including Prism Inventory, Save-A-Lot, Walgreen’s, and McDonald’s, where he would make sure to bring breakfast home every morning to his mom. Most recently, Mooks worked for William Johnston & Co, Inc. performing tree care and plant health management until an automobile accident prohibited him from doing so. He made such a lasting impression on his employer that he received a letter from the company stating what a great, hard-working employee he was and was welcome to rejoin the team whenever he wanted. Mooks eventually decided to go into business for himself purchasing, fixing, and selling cars. The Lord called Mooks home to eternity with Him on May 19, 2020. He leaves to cherish his awesome memory, his daughter, Layla; parents, Douglas Smith, Sr. and Eva Dill-Smith; sisters, Tanya and Ronea; brothers, Sean, Doug, Jr., and Devon (Samara); maternal grandmother, Dorothy Dill; Godfather, Lafenus Derrickson; Godmother, Charita Young, and a host of uncles, aunts, nieces, nephews, cousins, and friends including Ricky, his best friend who was more like a brother. He was preceded in death by his paternal grandparents, Wanda and William Smith, Sr. (known as Snuffy) and his maternal grandfather, Melvin Dill, Sr. (known as Sabu). The number 19 will forever be associated with our baby boy, Mooks: the 19th homicide in Chester, on the 19th day of May, during Covid-19. A loving father, son, brother, cousin, friend, and favorite uncle to his nieces and nephews, the life of E’van Dill-Smith will be remembered and cherished by his loved ones forever. The family of E'van Dill Smith is requesting in lieu of flowers monetary donations to fund the education of E'van's daughter Layla, if so desired. https://www.gofundme.com/f/mebr3-love-for-layla?utm_source=customer&utm_medium=email&utm_campaign=p_cf+share-flow-1

The family of E'van Dill Smith is requesting in lieu of flowers monetary donations to fund the education of E'van's daughter Layla, if so desired.

The world became a brighter place when E’van LaMar Dill-Smith’s...