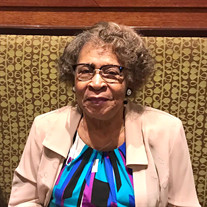 Dorothy Myers, the daughter of the late Getty August Murray and Bertha Mae Williams-Matthews, (at six-months-old adopted by Howard & Levin McClary) was born on October 7, 1923 in Salters, SC. Very peacefully in her sleep on July 20, 2020, surrounded by her children, God called her home to heavenly rest. Dorothy was preceded in death by her husband Lee Myers, Sr.; daughter, Barbara Jean Myers; son Jeromy Otis Myers; six brother, James Rogers, Samuel Matthews, Howard Matthews, Fred Matthews, Edward Matthews and Harold Murray; three sisters, Iola Morant, Emma Lee Matthews and Roberta Matthews, a special grandson Lee Jamar Pinder and three special great grandchildren. Dorothy was a member of Union Baptist Church, located in Salters, SC, as a young adult. Upon her moving to Chester, she joined the Historic Calvary Baptist Church in 1942 under the direction of Reverend Dr. J. Pius Barber. Dorothy was a senior usher, served on the building fund committee, served on the Oley Barber Missionary Group and numerous other committees throughout her tenure attending this church. During this time, Dorothy had the pleasure of hearing Dr. Martin Luther King, Jr. speak at Calvary Baptist Church, as he was a Sunday school teacher there while studying at the Crozer Theological Seminary. Dorothy was the matriarch of the Myers and McClary families and was the rock that held us all together. She had a heart of gold and a personality that would just draw you into her. To everyone whom she would meet, she was affectionately known as “Nana”. There wasn’t anyone she wouldn’t welcome into her home, nor were there many who didn’t call her a friend. Dorothy leaves to cherish her memory her daughter, Lottie Bea McClary-Francis of Columbia, SC; three sons, Lee Myers, Jr, Gregory Myers, and Kelly Myers all of Chester, PA; three sisters, Ellen Matthews-Small, Lillie Mae Matthews both of Salters, SC and Josie T. (Benjamin) Matthews-McClary of Providence, RI; five sister-in-law’s, Lillie Mae Matthews and Sue McCray both of Philadelphia, PA; Florence Mae Matthews and Irene Mae Matthew both of Baltimore, MD; and Adell Barr of Kingstree, SC; 38 grandchildren, 74 great grandchildren, 17 great-great grandchildren, and a host of nieces, nephews, family and friends.

Dorothy Myers, the daughter of the late Getty August Murray and Bertha Mae Williams-Matthews, (at six-months-old adopted by Howard & Levin McClary) was born on October 7, 1923 in Salters, SC. Very peacefully in her sleep on July 20, 2020, surrounded... View Obituary & Service Information

The family of Dorothy Myers created this Life Tributes page to make it easy to share your memories.

Dorothy Myers, the daughter of the late Getty August Murray and...

Send flowers to the Myers family.