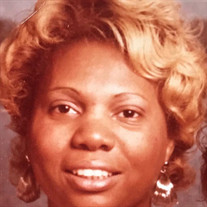 On Tuesday April 28, 2020 God called home his child Dorothy Pearl Greene Johnson affectionately known as “Mommy” to her family. Dorothy was born March 11, 1943 in Woodlyn Pa. to the late Elwood Greene Sr. and Dorothy Pearl Rickards Little. Dorothy moved to Chester, Pa. at an early age and graduated from Chester High School in 1962. She then attended Cushman Business School in Philadelphia, Pa. She married the late Donald Maxie Johnson and from this union came 2 daughters Donna LeSia Hudson (Lloyd) of Brookhaven, Pa. and Rochelle Monique Johnson of Upper Chichester, Pa. As a child she attended Fairview AME Church in Woodlyn, Pa. and later joined Shiloh Baptist Church in Chester, Pa. She was employed by the City of Chester and retired in 2005. She loved working for the City of Chester and was a devoted member of the National Black Policeman’s Association. She loved to entertain, dance, cook, and dress. She also had a special place in her heart for her children, grandchildren, and great grandchild. She was also known for her bus trips to Atlantic City that she organized. She loved her family and would go out of her way to do what ever she could for anybody. She was preceded in death by her brothers: Osborn, Louis, Edward. And Elwood. She leaves to cherish her memory her daughters Donna Lesia Hudson(Lloyd) of Brookhaven, Pa. and Rochelle Monique Johnson of Upper Chichester, Pa, her grandchildren Timothy, Dominic, and Jordan Hudson, her great granddaughter Savannah Marie Hudson, her sisters Georgianna Logan of Aston, Pa. and Carol King of New York, her brother Richard Little of San Francisco, her nieces and nephews Danyel Conyers, Ian Logan, Kenneth Greene, Robin Boyer, Jocelyn Dean, her God daughter Aja Craig, and a host of many other nieces, nephews, cousins and friends. She will truly be missed.

The family of Dorothy P. Johnson created this Life Tributes page to make it easy to share your memories.