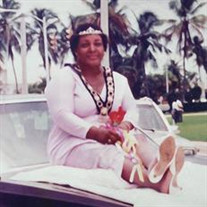 Doretha Holmes Johnson departed this life peacefully at Crozer-Chester Medical Center on September 30, 2019. She was born on March 3, 1930 to the late Ruben G. Holmes and Elizabeth Holmes. She is predeceased by sons -Kenneth Holmes and Kevin Holmes; brothers- Frank Holmes and Andrew Holmes; sisters: Hester Louis Bentley, Mary Freeman, and Patricia Waters. Doretha (Rita), which she is known by to family and friends, was born the fourth of ten children. She was born and raised in Chester. She was educated in the Chester School District. She was a graduate of Thomkin School of Beauty Culture for Beauticians, where she got her state license in 1965. This prompted her to start her own shop at home. She joined Shiloh Baptist Church and was baptized there. She worked various jobs throughout her life at Personal Care in Paoli, The Franklin Mint, as a cook for Union Gospel Mission, Inc., and one of her favorites the 501 Bar. Over the years, she held some jobs that allowed her to work alongside some of her children which she loved. She had various other jobs, too. Doretha was the first woman of the City of Chester to fight for Welfare Rights for everyone. In 1968, she took her nine children to the Welfare Office and locked the door to office for 1 month and 3 weeks to fight for welfare. She was the first woman for the City of Chester to buy a house working in three bars: The 501, Walt’s Bar, and Live Wire. She paid cash for the home to take her children to safety. She fixed the basement of her home so the neighborhood children would have a somewhere to stay. Rita’s organizational ties included Charlotte Hall Temple #494, she joined in 1972. Her capacities ranged from Doorkeeper, Vice- Daughter Ruler, and Daughter Ruler. She was a member of the Shining Light Past Daughter Ruler Council #2. She received her honors on May 16, 1978. She belonged to the Past State President Club, Past Presiding Daughter Rulers Club, Military Police, and Eastern District of Pennsylvania. She ran for Queen in the Eastern District of Pennsylvania in March 1968 and she won and received her honors in Miami, Florida. She was also a member of the Guiding Light Chapter #88 and Unity Court #12. She loved to volunteer and help wherever she could. She was passionate about being a volunteer worker for The Salvation Army. In 2007, she became a soldier at Camp Ladore. Rita will be missed dearly. She has eleven biological children and one adopted child. She was a helping hand to anyone she met. Along with doing what she needed to do to provide for her family. Her kitchen was open to anyone who needed a meal. Sometimes people didn’t really need a meal, but her cooking skills were well known so they showed up for a plate which she always provided. With that easy spirit, it wasn’t hard for her to flip the switch and tell you about yourself instantly. Even during her last days, she still had time to say, “Lord Help”, then proceed to tell you about yourself. She loved to travel and did so sometimes with her children. She loved to put her pinochle skills on display at cookouts. Some Budweiser or Rolling Rock was she was good to go. Wherever the crabs were being cooked is where she wanted to be. She played Solitaire until the sun would come up. She loved the casino and enjoyed playing the slots. She enjoyed the slots so much that her grandson Norman bought her a tablet and downloaded the game so she could play anywhere. But he had to have a talk with her because she didn’t know that all the chips she was buying and losing were coming from his bank account. She laughed and said. “I will try to win more.” She loved her family and they loved her back. Doretha lived an exceptional life. She leaves behind to cherish her memories; sisters- Mable Hammond and Dorothy Grimes; brothers- Leroy Holmes and John Holmes, Sr.; children: Brenda Johnson, Janet Johnson, Sheila Johnson, George J. Johnson, Jr., Deborah Holmes Mumford, Melody Candy Johnson, Juliet Johnson, Dennis Albert Johnson, Joseph Johnson, and Dale Smith; 33 grandchildren; 76 great-grandchildren; 25 great-great grandchildren; and a host of nieces, nephews, friends, and a very dear friend, LaVergn Reid.

Doretha Holmes Johnson departed this life peacefully at Crozer-Chester Medical Center on September 30, 2019. She was born on March 3, 1930 to the late Ruben G. Holmes and Elizabeth Holmes. She is predeceased by sons -Kenneth Holmes and Kevin... View Obituary & Service Information

The family of Doretha Johnson created this Life Tributes page to make it easy to share your memories.