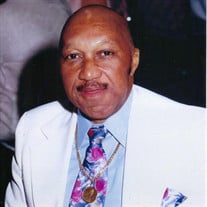 Donald Ernest Saunders was affectionately known as Pooh, Poochie, Big Don, and the list goes on. He was born on May 29, 1937, to the late Ernest and Helen Saunders. He was born and raised in Chester Pennsylvania and educated through the Chester Upland School District. He was brought up in St. Paul CME Church starting with the cradle roll. He graduated from Chester High School in 1955 and served time in the Marine Corps. As a teenager, he went to Asbury Park in New Jersey for summer work. This was his first job that he worked very hard to get. After high school he worked at Piasecki Helicopter Corporation, later known as Boeing. He later started working for Sunoco (Sun Oil Company) in 1968 as an operator in the operations department. He worked there for 30 years. During his time there, the turning point of his testimony came about when he was encouraged to start the 12-step program. After that, he wrote his own story. He was a founding member of the Gospel Choir of St. Paul CME Church. He was one of the two remaining founding members which he was recognized for at their 40th anniversary ceremony. He was also a driver for the children’s choir at St. Paul and the Big Friends Program through Widener University. He leaves to cherish his memory his wife, friend, and partner of 49 years Tina Saunders. His daughter, Donna Childs of Chester, PA and son Donald G. Saunders of Chester, PA. Three grandchildren, Dionna, Diamond and David Childs of Chester, PA and one great-grandson Sterling N. Childs of Chester, PA. His siblings Helen E. Loper, of Philadelphia, PA, Shirley J. Ginn of Atlanta, GA, Carolyn S. Brandon of Chester, PA, Tracy G. (Rev. Elaine C) Saunders of Boothwyn, PA and Maxine C. Ross of Williamsport, PA. One sister-in-law, Eloise Gadsden of Hollywood, SC. Mother of his children, Geraldine Saunders of Chester, PA. Lifelong friend Albert (Jean) Butler. Plus, a host of nieces, nephews, cousins, and friends. Donald was known for his love of life. He was always a happy person and enjoyed spending time with family and friends. His favorite scripture was I Corinthians 13. He was in a 12-step program that he served daily for 50 years. He has helped many, many people. He’s lived a good life; his soul is at rest. We can take comfort in knowing that all is well in the hands of God. Join Zoom Meeting https://us02web.zoom.us/j/87844235305?pwd=ZnkwcUcyd1FGNjVKT1E4UE8rU2FSdz09

Donald Ernest Saunders was affectionately known as Pooh, Poochie, Big Don, and the list goes on. He was born on May 29, 1937, to the late Ernest and Helen Saunders. He was born and raised in Chester Pennsylvania and educated through the Chester... View Obituary & Service Information

The family of Donald E. Saunders created this Life Tributes page to make it easy to share your memories.

Send flowers to the Saunders family.