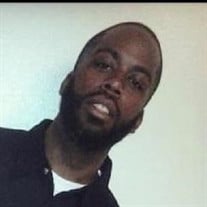 Darrell Lamar Stokes was born on December 8th, 1985 at Sacred Heart hospital which was originally located in Chester, Pennsylvania. He is the son of Leslie Copeland, and Eric Stokes and was preceded in death by his stepfather Marvin Porter of Chester, Pa. Darrell goes by the nick names Rell, Rellzy, and Rally. Growing up in Delaware, he began to love sports at a young age when his stepfather Marvin, placed him in football. Darrell’s love for football and basketball grew tremendously and he was a proud fan of the Philadelphia Eagles and the Philadelphia 76xers. Darrell had a fun-loving sense of humor and has always been a free spirit. Darrell always had a love for helping others and when he was a little boy, he had spoken of becoming a Licensed Practical Nurse. Darrell enjoyed the fun side of life and celebrated his happiness with good music, laughter, and dancing with his family and friends. He loved being around people and brought so much joy and laughter to others. With his hardworking spirit, Darrell was that person who always accomplished a goal he set. Even if it took him longer than he may have expected, he still never gave up on himself. Darrell certainly had a go-getter spirit and was eager to find ways he could better himself and get to the next level. One of the many instances of Darrell being persistent was pursuing his goal to become a Flagger. One day while driving with his Fiancé, he saw a few flagger men working. Darrell stopped and asked one of the workers how he could apply and get hired. His determination allowed him to leave his employment at Goodwill in 2019 to start working as a Flagger. Being the people person that he is, Darrell knew that he wanted to continue helping others so in 2020 Darrell began to work as a Direct Support Professional at Connections Community Support Program, INC located in Newark Delaware. He truly loved his job and went above and beyond for his residents. Darrell enjoyed taking his residents to the park and to the grocery store. He was a man who never missed work and who took pride in taking care of his family. Darrell was also a part of The Achievement Center where he at times volunteered, attended group meetings, and was able to take courses. In 2021, Darrell completed courses at the Achievement Center and earned a certification in construction. He was extremely happy about this was even more ecstatic that he got hired at Reybold for construction. Darrell’s life was taken suddenly on the early morning of February 16, 2021 where he later passed away at the Christiana Hospital located in Newark Delaware. He is survived by his fiancé Desheema Roundtree of Newark, De along with five beautiful children, Da’Shya, Da’Nasha, Re’yonna, Darrell Jr, and Eric Stokes all of Newark De. He is also survived by his mother Leslie Copeland of Fort Worth Tx, his father Eric Stokes Sr. of Chester Pa. Darrell also leaves behind six siblings, Lamont Stokes (Tarrik), Jaren Porter, Jasmin Porter-Pace (Darnell), Iyanna Stokes, Eric Stokes JR., and Erisha Stokes. He was loved and will be missed by his cousin Eddisha Kitt who he also looked at as a sister. Darrell leaves behind many aunts, uncles, nieces, nephew, cousins and friends. Join Zoom Meeting https://us02web.zoom.us/j/83242482101?pwd=aGtUcjg0T01SeHJwb2xjaDc4amhCZz09

Darrell Lamar Stokes was born on December 8th, 1985 at Sacred Heart hospital which was originally located in Chester, Pennsylvania. He is the son of Leslie Copeland, and Eric Stokes and was preceded in death by his stepfather Marvin Porter of... View Obituary & Service Information

The family of Darrell L. Stokes created this Life Tributes page to make it easy to share your memories.

Darrell Lamar Stokes was born on December 8th, 1985 at Sacred...

Send flowers to the Stokes family.