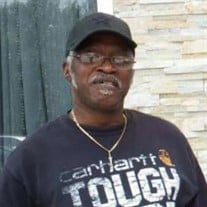 Obituary Daniel 'Danny' Dawson was born on March 16, 1948 to the late James 'Butter Ball' and Dorothy Dawson in Chester, Pennsylvania. Danny departed this life on February 23, 2022 at Riddle Memorial Hospital. He was preceded in death by his daughter, Beatrice Morgan Rasheed, his sisters Elizabeth Jefferies, Deloise 'Muffin' Dawson, and Tina Dawson; and his brothers, James Dawson, Jr., Vernon Fitzgerald, Charles 'Earl' Dawson, and Stephen "Stevie' Dawson. Danny was educated in the Ridley School District. He served in the United States Army from 1967 to 1973, earning various medals of valor. After returning home from the Army, he held down several jobs as a truck driver. In 1973, Danny met the love of his life, Brenda Morgan, and they united holy matrimony in 2007. Together, they raised four beautiful daughters, Beatrice, Danielle, Natalie, and Angel. They adored their father, and he adored his girls. Although Danny did not belong to a particular church, he always maintained a personal relationship with the Lord. Danny's pastimes include attending car shows, sports events, and spending time with his family. He was a diehard Dallas Cowboys fan! Danny leaves to cherish his memories; his wife, Brenda; Daughters, Danielle Morgan, Natalie Morgan, and Angel Tobie; one son-in-law. Jeremy Tobie; four sisters, Valerie Weaver, Stephanie Dawson, Jacqueline and Shelly Fitzgerald; four brothers, George Dawson, Henry Strader, Richard Dawson, and Gary Fitzgerald; thirteen grandchildren (and one on the way); five great-grandchildren; a special nephew, Sean Dawson; and a host of nieces, nephews, aunts, uncles, cousins, and friends. The family of Daniel 'Danny' Dawson sorrowfully and humbly submits to the will of God

Obituary Daniel 'Danny' Dawson was born on March 16, 1948 to the late James 'Butter Ball' and Dorothy Dawson in Chester, Pennsylvania. Danny departed this life on February 23, 2022 at Riddle Memorial Hospital. He was preceded in death by his... View Obituary & Service Information

The family of Daniel Dawson created this Life Tributes page to make it easy to share your memories.

Send flowers to the Dawson family.