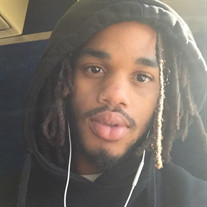 Dan Gregory Hayes, Jr., was born on June 2, 1995 and departed this life on June 4th 2019 at Crozer Chester Medical Center in Upland PA. Greg was born to Risa E. Starks of Collingdale, PA and Dan Gregory Hayes Sr. of Killeen, TX. Greg “Dan” was educated in the Chester Upland School District and graduate with the class of 2013. Greg’s last employment was at Ruby Tuesday in Springfield, PA as a dishwasher. Greg was a die-hard sports fan. He played baseball for the Chester Little League, basketball for Chester Biddy, football for Chester Panthers, and the Philadelphia 69th Street Wildcats. He inherited the name Chester for being the fastest runner on the team. Greg’s passion grew deeper for football as he played for Chester High School, where he was known as the aggressive running back and line backer. Per his coaches, he was known as a person who wouldn’t give up and played hard. He loved football so much when injured he refused to quit. Greg also ran track for Chester High School and was an avid body builder for The World Physique Federation USA. In Greg’s spare time you could find him playing video games or sitting down writing lyrics to rap songs. Greg loved going to the studio with his friends and laying down tracks. Greg was that person that loved wearing the latest trends especially sneakers. Greg was a very energetic person with a lot of wisdom. During his childhood you could find Greg reading the newspaper and watching the News. Greg was the middle child and because he was a Momma’s boy, you would have thought he was the baby. He was a loving son, brother, uncle, nephew, cousin & friend. Greg was known as Dan to his classmates, Greg to his family, Tank to his friends and Mooters to his mother. Greg leaves to cherish his memory; His mother, Risa E. Starks, Collingdale, PA; His father, Dan G. Hayes Sr., Killeen, TX; His grandparents, Robertene Lynn, Chester, PA; Phillip Starks Sr., Wilmington, DE; Paula Seth, Killeen, TX; Andrew Seth, Bear DE; 1 brother, Shawn Robertson, Chester, PA; 1 sister, Ottira Fontaine, Collingdale, PA; 1 stepbrother, Darwyn Hayes, Chester, PA; 3 stepsisters, Dan’ye Hayes, Chester, PA; Danyel Hayes, Chester, PA; & Jelani Powell, Wilmington, DE; 1 nephew, Shawn Robertson III, Chester, PA; 2 nieces, Sha’nya Robertson, Chester, PA; Serenity, Robertson, Chester, PA; and a host of family & friends.

The family of Dan G, Hayes, Jr. created this Life Tributes page to make it easy to share your memories.