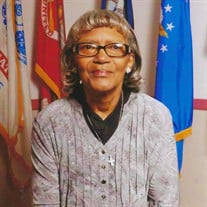 Constance Beverly Jennings Mills affectionately known as Connie B, Mom, Mommy, Grandma, Gramps and Nonnie, age 78, entered into her eternal rest on June 3, 2020 surrounded by her loving family at home. Connie was born on October 29, 1941 in Chester, PA to the late Howard and Ethel Jennings. She was the firstborn child and only daughter that God blessed them to have. She was married to her lifelong partner James A. Mills, for 63 years. From this union they share 7 children. Connie, a member of the 1959 class of Chester High was blessed to graduate from Chester High School with her only son in 1983. Spending most of her time as a homemaker, in her working years she was a crossing guard for the Chester Upland School District and ran her own home day care. She cared for dozens of children, nurturing each one of them as her very own. Connie was a lifelong member of Grace Community United Methodist Church where she served faithfully in various capacities; the president of the youth choir, senior choir and Witnesses for Christ. As well, an educator and mentor for the youth and young adult ministry. Connie was known for her good cooking and creative crafting abilities. She enjoyed making various items and sharing them with family, friends and neighbors. A true matriarch of the family she never missed an opportunity to share important historical memories with each generation. She was preceded in death by her parents Howard and Ethel Jennings, her brother David Michael Jennings and infant daughter Leslie Mills. Left to cherish her memory, a loving husband James A. Mills. Six beloved daughters Beverly Mills, Vera Ford (Kenneth), Sloane Mills, Angela Mills (Robert), Adrienne Scarlett (Carlton) and Chrystal Rodriguez. One cherished Son Sidney Mills (Tammy). Two Brothers Howard Jennings (Dolores) Frederick Jennings and two Sisters in-law Sylvia Mills and Mary Mills. Five special friends, MaryBeth Bishop, Helen Watson, Jerrie Camper, Barbara Burton, and Beula Platt. A special Cousin, she called sister Christine Hicks-James. A special Niece, she helped raise Ciara Middleton. Two God Children Ursula Watson and Jamir Harper. 13 Grand Children, 22 great-grands, a host of nieces, nephews, cousins and a lifetime of friends. Respectfully, The Family.

Constance Beverly Jennings Mills affectionately known as Connie B, Mom, Mommy, Grandma, Gramps and Nonnie, age 78, entered into her eternal rest on June 3, 2020 surrounded by her loving family at home. Connie was born on October 29, 1941 in... View Obituary & Service Information

The family of Constance B Mills created this Life Tributes page to make it easy to share your memories.

Send flowers to the Mills family.