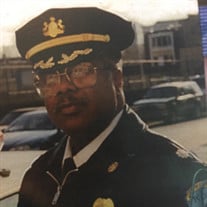 Commodore S. Harris Jr. was born on January 5, 1945 to the late Commodore S. Harris Sr. and Althea Harris in Chester, Pa. He was born and raised in the City of Chester which he loved so dearly and was educated in the Chester Upland School District. He was a member of Calvary Baptist Church as a child where his journey to serve the lord began. While a member of Calvary he had the experience of meeting Reverend Dr. Martin Luther King Jr. in Sunday school. In 1966 he had his eye on Barbara Mayo who he knew from High School. Commodore and Barbara dated for two years before uniting as one in 1968 at Bethany Baptist Church in Chester, Pa. This union produced two beautiful daughters, first born was Nicole Renee Harris in June of 1974 and their second daughter Tiffany Harris completed the family in September of 1980. In 1962 he joined the United States Air Force, where he served our country gracefully until when he was honorably discharged in 1966. Immediately afterwards he began his career with the Chester Police Department. In his distinguished 30-year career with the department he received numerous promotions, declarations, and accommodations. He held several supervisory positions in Juvenile division, Detectives, Narcotics, and Uniformed Patrol. He retired in May of 1995 as Chief Inspector being second in command. During his thirty years in the department, he served the community with diligence, integrity, and honor. At the time of his retirement, he was recognized and proven to be the most decorated police officer in the history of the Chester Police Department. In addition to being a dedicated public serviceman with Chester Police Department, he volunteered in numerous ways to help his community. Commodore was the lead pastor at First Faith Baptist church, a lifetime member of the Chester branch of the NAACP where he also served as president at one time. Being a huge lover of Chester sports, he served as an assistant for the Chester Clipper football team, the chaplain for the Chester basketball team and volunteered as an umpire in the adult softball leagues in the city. In September of 2000 he moved to “his family home” Moncks Corner, South Carolina to continue to enjoy retirement with his wife Barbara and his family. Commodore always said when he retired, he would move to the South to be with his cousins, aunts, uncles, and friends. He spent 20 years in South Carolina where he was the owner of Rev’s Open Pit Barbeque Restaurant and served as a Deputy with Berkeley County Sheriff Department for 14 years. In August of 2020 Commodore and his wife Barbara returned home to Chester the City he loved to be closer to their family and friends. On February 22, 2021 Commodore S. Harris Jr. went on to be with the lord. Commodore Jr. was preceded in death by his mother Althea Harris, Father Commodore S. Harris Sr, and his sister Sandra E. Lewis & Brother-in-Law Nolan Lewis. He leaves to mourn his wife of 53 years Barbara Harris, his daughters Nicole Harris, and Tiffany Harris, Brothers Theron Harris (Matilda), Lovell Harris, Brion Harris (Nan), Kedrick Harris (Denise), God- Daughter Rhonda Chandler, God- Sons Karl Colder Jr., and Yankuba Camara, Grand Children Ja’Naizsa Harris, Olin Horsey Jr., Amber Chandler, Ashley Chandler, Great Grandchildren Rowan Chandler, and Dylan Shelton. As well as a host of nieces, nephews, aunts, uncles, cousins, and friends. Join Zoom Meeting https://us02web.zoom.us/j/87138199573?pwd=cENITDhGWlNlWDZXRHlRcHhLTWo5UT09

The family of Rev. Commodore S. Harris Jr. created this Life Tributes page to make it easy to share your memories.

Send flowers to the Harris family.