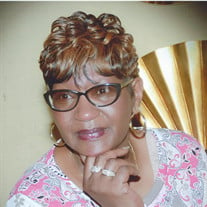 Cherry Ann Carson was born on January 9, 1954 to the late William and Tempie Carson in Chester, PA. She departed this life, knowing and loving the Lord, on February 12, 2020, at the age of 66. She was predeceased by her sisters, Margie M. Fitzgerald and Beatrice Asparagus, and her brother, Willie E. Fitzgerald. Cherry Ann was the fourth of nine children. She was educated in the Chester Upland School District and was a graduate of the Chester High School Class of 1972. In October of 1972, she gave birth to her one and only son, Nelson A. Carson. Nelson was Cherry Ann’s pride and joy. Over the years, she held various jobs, and was a diligent worker. In 1980, she was hired at Riddle Memorial Hospital in the Environmental Services Department where she worked for 36 years until her retirement in 2016. Cherry Ann enjoyed being around family and friends. You would often see her with her special cousins, Terry and Gail Whitehead, or her good friend Marla Copeland. No day would be complete for her without checking on her granddaughters, Nyeirah and Sidney. She always made sure they were fine. They both were the love of her life. She leaves to cherish her memory, her loving son, Nelson Carson of Chester, PA. Two granddaughters that she adored, Nyeriah Carson of Dover Delaware, and Sidney Carson of Wilmington, DE. Four sisters, Yvonne Fitzgerald, Rachel Carson, and Linda Carson, all of Chester. PA, and Jessie Motley (Curt), of Wilmington DE. Two brothers, Sherman Carson, of Newark, DE and Wilbur H. Carson of Chester PA. Loving aunts, Jessie Powell and Betty Bean of Chester, PA. A mother figure, Hattie Green of Pensacola Florida. Lifelong friends, Nadine Simmons, Veronica Jones, and Dorothy Harper of Chester, PA., Marla Copeland, of Claymont, DE and Linda Abili of Wilmington DE. Many other relatives from Washington DC and Baltimore MD, and a host of other family and friends.

Cherry Ann Carson was born on January 9, 1954 to the late William and Tempie Carson in Chester, PA. She departed this life, knowing and loving the Lord, on February 12, 2020, at the age of 66. She was predeceased by her sisters, Margie M.... View Obituary & Service Information

The family of Cherry A. Carson created this Life Tributes page to make it easy to share your memories.

Send flowers to the Carson family.