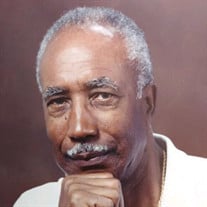 Carl Lewis Eggleston entered this life on June 6, 1924 in Delaware County, Pennsylvania. Despite the youth of his mother and the sending away of his young father, Carl had a loving and supportive childhood in Morton, PA. An athletic young man with high intelligence, Carl soon began to distinguish himself on Springfield High School's track and basketball teams. Carl graduated high school in 1942. After taking a year off to work on Philadelphia's docks, Carl enlisted in the United States Army on April 5, 1943 during World War II. He spent one year, four months and two days stateside; and one year, six months and thirteen days in foreign service for his country. As recorded on his military discharge papers, Carl was part of the February 19, 1945 invasion of Iwo Jima and had risen to the rank of Staff Sergeant. Always close to his beloved mother, the late Hannah Lytle (née Tingle), Carl wrote 104 letters to her during his military service, from basic training, through combat situations, to plans for discharge. It is one of the largest identified existing collections of letters written by a single African-American soldier to a single individual during World War II. In 2015, Carl was surprised and honored to receive a letter of appreciation from President Barack Obama thanking Carl for his service personally, an acknowledgement of the role of the segregated “Negro” armed forces companies in the United States’ victory. In 1957 Carl, who had been reared in the African Methodist Church where he sang regularly in the male choir, attended a meeting headlined by Malcolm X. Carl and his wife Edith (née Bradley) decided to follow Islam as it was presented to them. While Carl remained committed to the philosophies of civil rights and equal opportunity, he left the faith; however, to the present day, one of Carl's four children and four of his eight grandchildren still are Muslims. Carl had taken advantage of the G.I. Bill to go to college, study business and seek employment with the federal government in the computer systems analyst department of the U.S. Social Security Administration (SSA). This career-long position took him to SSA’s national headquarters where he and Edith raised their children to adulthood in the lovely Forest Park neighborhood of Baltimore, Maryland throughout the 1960's and 1970's. Carl was a man with lifelong commitment to bettering the community. He was dedicated to the non-discriminatory access to capital for home mortgages and transportation that the credit union movement could provide, an alternative to the “redlining” banks of the day, and began to serve on the SSA Credit Union in 1966. Carl was elected to its Board of Directors in 1972, ultimately being elected Chairman of the Board. He maintained his position at SSA as a systems analyst, expanded his volunteer leadership to serve national associations of credit unions, including opening two inner-city credit unions, and due to his professionally admired precise patterns of thought and methods was assigned special projects as an investigator of discrimination claims for SSA. Carl met his second wife Joan (née Armstead) during the later years of his career at SSA. Upon retirement, Carl and “Joni” moved to El Paso, Texas where they had vacationed regularly, cultivating a loving circle of retired military friends who enjoyed bowling, golfing, and those great Texas steaks. After Joni predeceased Carl in 2014, he relocated to a senior living community in the Baltimore area, then ultimately to memory care near his daughter in Florida, where he celebrated his 95th and final birthday in 2019 with friends he had made during his many visits there. Carl Lewis Eggleston departed this life on January 9, 2020 leaving a vacancy in the hearts of those who loved and admired him that will not be filled by another. He is survived by daughters Carlene Johnson, Waheedah Shaheed and Katherine Eggleston (James), son Carl Eggleston Jr., sister Jewel Kelsey (Ronald), five grandsons, three granddaughters, one nephew and one niece. Carl also lived to see the births of his first great granddaughter, two great grandsons, four great nieces and one great nephew. Always a defender of those who were weaker than he, his natural courage and strength won much admiration from those who benefited by knowing him and following his example. Carl was an elegant, brilliant man who never spoke about his accomplishments. Instead he used his deep, cultured voice to encourage all members of the African-American community to learn, be helpful to each other, and when successful, share knowledge that others can follow to be courageous in the face of opposition.

Carl Lewis Eggleston entered this life on June 6, 1924 in Delaware County, Pennsylvania. Despite the youth of his mother and the sending away of his young father, Carl had a loving and supportive childhood in Morton, PA. An athletic young man... View Obituary & Service Information

The family of Carl L. Eggleston created this Life Tributes page to make it easy to share your memories.

Carl Lewis Eggleston entered this life on June 6, 1924 in Delaware...

Send flowers to the Eggleston family.