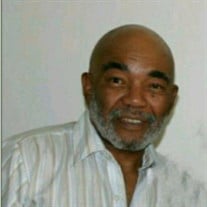 “CALVIN WILLIAM CHURCH” was born on July 7, 1941, in Philadelphia, PA; to the late Nelson and Iona Church; he was the eldest of both sons born, to the Church Family. He was educated in the Chester-Upland School District System. Calvin gained employment at an early age at Oppenheimer’s Food Market, as a bagger, prior to attending school and becoming a 1st Class Certified Welder. He worked at General Marine Industrial Services (GMIS), Laskos, Sun Ship & Dry Dock and Atlas Welds, retiring in 1999. One of his greatest achievements and fondest projects was making and installing the Gold Cross on the roof of Sacred Heart Hospital, in Chester, Pennsylvania. In 1959 Calvin, met and married Elsie Robertson and to that union they added six children; Calvin Jr., Evette, Paris, Jerome, Maria, and Damon. Calvin, enjoyed being with family, friends, and the golden girls playing cards, eating crabs, and traveling to Salisbury MD, with his favorite cousin the late Vanetta Fountaine. He was truly a die hard, Philadelphia Sports Team Fan. He went to Memorial Park, every Sunday, to play basketball; until he turned sixty years old, his attire was his booty shorts, he would cut the sleeves off his sweatshirts, his red double sole Nike’s, along with a baseball cap. He was ready it didn’t matter if you were young or old, it was game time. Calvin was preceded in death by his parents: Nelson, and Iona, brother: Chauncey & his beloved friend: Kathleen Nash. He leaves to cherish his loving memories, his children; Calvin Jr. (Valencia), Middletown, DE; Jerome (Rhetta), New Castle, DE; Evette, Paris, Maria, Damon (Tracey), Anthony and Kimberly Nitili, all of Chester, PA; 35 Grandchildren, 44 Great Grandchildren, 3 Great Great Grandchildren; a host of family and friends. Lovingly Submitted

&#8220;CALVIN WILLIAM CHURCH&#8221; was born on July 7, 1941, in Philadelphia, PA; to the late Nelson and Iona Church; he was the eldest of both sons born, to the Church Family. He was educated in the Chester-Upland School District System. Calvin... View Obituary & Service Information

The family of Calvin W. Church Sr. created this Life Tributes page to make it easy to share your memories.

Send flowers to the Church family.