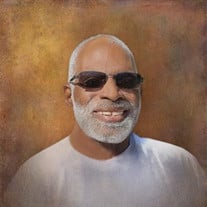 Brian Eugene Bratcher was born on August 2, 1963 in Chester, Pennsylvania. He was the son of the late George M. Bratcher, III and Ann Louise Hollis Bratcher. Brian was predeceased by his grandparents Lee S. Hollis, Sr. and Sarah H. Winters Hollis, and George M. Bratcher, Jr. and Lillie Jarrett Bratcher. Brian attended High Street Elementary in West Chester, PA. He was a graduate of Henderson High School and West Chester State College where he majored in Psychology. He was an IT Clerk who also enjoyed comic book and coin collecting. Growing up, Brian regularly attended Sunday school at Rice’s Temple AUMP church. He possessed a pleasant demeanor and had a quiet but infectious sense of humor. Brian was a track runner, who was in training for the Junior Olympics. At age 15, he was participating in a scrimmage football game. When he was making a tackle, he had his 4th, 5th, and 6th vertebrae broken, resulting in his life’s status as a quadriplegic. He was a tenacious, intelligent, strong young man who never faulted the ball carrier in the game which resulted in his life’s journey as a quad. He instead, sent a “tape recorded message” to the young man whom he had tackled to say he did not have any malice toward him because it was “an accident.” Brian was always experimenting with things he could do as a child without getting into trouble. He would go into the downtown area of West Chester where parking meters were; and as an avid reader, would take a book and a lawn chair, sit in the metered parking space after putting money in the meter, and read a book. When the meter expired, he would fold up his chair and walk back home. On another occasion, he ordered a set of encyclopedias (without parental permission) and was able to keep them without having to pay for them because he was only 12 years old and a minor. Hence, he was probably the reason one needs to be 18 or older to purchase items. His aspirations were to become a lawyer. He was awarded a full 4-year scholarship to Brown University but was unable to accept because of his accident. He admitted that was one of the most emotional times in his life. He was determined to be the best person he could possibly be - mentally, physically and spiritually. For this reason, he was loved by everyone who had a chance to know him. Brian had the opportunity to be visited by President Jimmy Carter who came to visit him and take a photo of him as one of the first individuals to have a halo (a device to hold his head and neck straight). He was also visited by many athletes, who came to give him encouragement and to give him paraphernalia. “Brian’s Run” was established in 1978 because the community of West Chester wanted to help the family with expenses after Brian’s accident. They thought they would raise maybe a thousand dollars. They registered runners for the run and raised, to their amazement - $20,000. The run continues today 41 years later and is one of the top runs in the “Top 12 Essential Philly Runs”. The fund assists people who are in need of wheelchairs, medical devices, and forms of transportation which they may require. He leaves to cherish his memories: his beloved brother, Byrin Bratcher (Nadine) of Upper Chichester, PA; sister Brynna Braswell (Lance), Honeybrook, PA; step mother Susan Simmons Bratcher, Downingtown, PA; 3 aunts, Sandra Hollis Trotter of Sanford, FL, Joyce Hollis Swain of DeBary, FL, and Catherine Bratcher Boyer of West Chester, PA; 3 uncles, Herbert A Trotter of Sanford, FL, Simon M Swain of DeBary, FL, Lee S Hollis, Jr. of Wilmington DE; 1 great uncle, Cornelius R Winters, Chester, PA; 2 nieces, numerous cousins, and a host of friends. Lovingly Submitted by The Family

The family of Brian E. Bratcher created this Life Tributes page to make it easy to share your memories.

Send flowers to the Bratcher family.