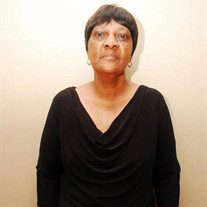 Beryl Rose Williamson was born to Luna Grey and Ivan Grant on October 28, 1943 in St. Catherine, Jamaica. Beryl was the second oldest of ten children. Beryl grew up in the beautiful Jamaican countryside and later relocated to Kingston, as a young vibrant girl looking to embark on her journey of life. She worked in various booming industries and remained close with her family. In 1972 Beryl Grant met a tall and handsome man, Aique Williamson who went on to become the love of her life and on August 8 1986, they were joined in holy matrimony. Together, they then raised four children, twin boys Clifton and Ian, and two girls Karen and Alista. Beryl began making her house a wonderful home for her husband and kids and was a role model to her oldest daughter Karen to follow in her footsteps. Beryl and Aique were well known in the community as “Mr and Mrs Willie”. Beryl was a loving parent who provided a wonderful example to her children who grew to become industrious and dedicated in life as a result of a wonderful example of a mother. During her time in Jamaica, Beryl was an avid church goer for over 16 years at Portmore New Testament Church of God, and was involved in various ministries within her church. Her dedication and service led to the youngest daughter, Alista, giving her life to Christ and following in her mother’s footsteps of service and dedication to all things that were related to the house of God. Beryl was responsible for taking care of her own mother before her passing and was known to provide shelter and solace for various family members who knew her as one of the most reliable and loving persons in the family. She was known among her siblings as always being the one who you could turn to in times of trouble or when needing assistance. In 1999, Beryl migrated to the United States where she began a new life. Beryl was later joined by her husband Aique and other children where they began to settle and put down their roots. Beryl was a hard working and loving member of her family and the glue that held her family together. She did several jobs to ensure her family was well taken care of. Beryl was able to form lasting bonds and friendships that spilled over to various families from all different backgrounds and ethnicities. Always loved by those who met her, she became a staple in the lives of her clients and was deeply loved. Beryl enjoyed being both a homemaker and a working woman and made both seem easy. She was tenacious and strong, especially during the passing of one of her beloved twin sons Ian, but was comforted by his twin Clifton and wife Sophia who proved to be a wonderful daughter-in-law. Beryl was very dedicated to her husband and celebrated over 35 years of marriage that included raising her children who went on to have kids of their own, which added even more joy to her life. Her blessings were multiplied when her grandchild Talia Smith was able to give her a wonderful great-grandchild Nylah Rose Grant. Beryl enjoyed working but was often seen at home taking care of her grandchildren and great-grandchild. She is revered as one of the best cooks, bested only by her loving husband Aique, and the two are regularly seen enjoying outings and spending time together. A loving and energetic couple, the two were rarely seen apart and enjoyed going out together whether shopping or planning events that involved having family over with lots of laughter, fun and fellowship. Beryl was an avid gardener and could be seen every morning outside watering and tending her garden that included plants that were even from her homeland Jamaica that she believed were important to help with one’s health and well being. She was always known for quickly allowing others to use the herbs and plants that she grew from her garden, and could always be heard boasting about the beauty of the garden that she tended and was her pride and joy. Her knowledge of plants and proper care of them led her to be sought after, and she was known for giving advice about plants and the best practices for them. Beryl leaves behind her family : her oldest daughter Karen, son Clifton and his wonderful wife Sophia and youngest daughter Alista. She also has grandchildren Talia, Jodi- Ann and Mia along with her great-grandchild Nylah who has been the youngest and precious addition to the family. Beryl has also been blessed with grandchildren from her deceased son Ian Camille Anglin, Dwayne Anglin, Misnash Anglin, Latoya Anglin along with great grandchildren Marlon Gordon, Marlando Gordon, Russian Rookwood, Aston Gordon, Ushaine Baker. She is survived by her siblings, and is loved dearly by family and friends that span multiple countries and continents. Her beautiful life is cherished and remembered by all the lives she has touched and blessed. Sorrowfully Submitted The Family

Beryl Rose Williamson was born to Luna Grey and Ivan Grant on October 28, 1943 in St. Catherine, Jamaica. Beryl was the second oldest of ten children. Beryl grew up in the beautiful Jamaican countryside and later relocated to Kingston, as a... View Obituary & Service Information

The family of Beryl Rose Williamson created this Life Tributes page to make it easy to share your memories.

Beryl Rose Williamson was born to Luna Grey and Ivan Grant on...

Send flowers to the Williamson family.