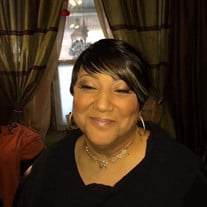 Barbara J. Johnson, affectionately known as “Mom Barb” went to be with the Lord Sunday, March 22, 2020. At the time of her death, she was a resident of Chester County, Parkesburg, where she had lived 25 years, with her loving husband, the late Richard G. Johnson. She came into this world, January 6, 1950, to the late Samuel Francis Green (step father) and Lilian Hunt. She was named Barbara Jean Green, by her step dad “ Mr. Greeny”. Her paternal father was the late Hodges Cobb Sr. She attended schools in the Chester Upland School District, and would have graduated with her class from Chester High, class of 1967, but instead decided to marry her high school sweetheart. In June 1967, she married the late Philip A. Carlton Sr., and from this union she had two children, Philip A. Carlton Jr. and Crystal L. Carlton. Several years later, Barbara obtained her diploma. She later took classes at Widener University, Widener Way for Women where she briefly studied accounting. She attended McCarey Medical School in Philadelphia, to become a medical assistant. She worked various jobs within her life: Bell Telephone, Upper Darby Pa., Comcast, John Wanamaker’s, and was in the banking field for over 15 years. The position she was most fond of was her job for Life in Christ Ministries, located at 3rd and Booth streets in Chester, Pa. This is where she retired from after 20 years of service. She served in various ministries while attending Life in Christ. She was head usher, oversaw both hospitality and finance ministry, a church cook, a member of Love in Action and served in Dorcas Ministry. Mom Barb even after retiring,still volunteered two days a week, until she was no longer able to do so. She remarried in 1987 to the late Richard G. Johnson and loved being his wife for over 30 years. The two of them together, enjoyed the life God had given to them. They always kept the kids and grandkids laughing. There were no children from this union, but as she always would say, he took on the entire crew and loved him like his own, especially their grandbabies. He gave them all nicknames and spoiled them rotten. He was especially loving and kind to her. She was loved and cared for by her children,which she said were always a blessing. She was especially thankful for her brother Hodges, who stepped into the position of caretaker after her husband passed. He was truly a gift sent from God. He and his wife Cindy provided a home within their home for her to stay and rest whenever she wanted to. Her Cindy Lou, affectionately called by her, was always thinking about her sis, and always lavished her with gifts. Barb loved all her children, Crystal (Chrissy) and Philip Carlton ( Phil), her brothers Hodges Cobb Jr. (Hodgie Mo) and Chris (Big Head), and her second daughter Eudora Cobb (Dorskie), whom she raised. She became her “Baby Bear” and affectionately called Mom Barb ‘Momma Bear’. Barb had two adopted children, Bernadette and Robert Warren. Robert and Pop Richard were known as ‘Batman and Robin’ and would always make her laugh. Robert and Bern honored and blessed her with love and affection. Her Chrissy’s home became the gathering place for the family, as hers once did, but Thanksgiving was her big day. It’s when all the family came home and enjoyed time together at mom mom’s and pop pop’s. Everyone who came left with containers of food and their own sweet potato pie. She loved her family and made sure there was enough for everyone. Talk about extras, she had them! Barbara was grateful and thankful for the life God had given her. Her greatest gift was giving. She loved Christmas and would almost give everyone a gift, especially the children. The church called her Mrs. Clause. She would say, that’s how God made her, with a heart to give. She leaves those who would celebrate her life her loving children Philip, Crystal, Hodges, Chris, and Eudora, all of Chester, Pa, grandchildren Dariq Cobb (Cobbido), Asia Carlton (Mo), Hodges Cobb (baby D), Martina Cobb (Teen),Isiah Carlton ( Zay ), Jashawn Cobb (Jay) , Mekatalili Carlton (Lili), Mekhi Oumarou (Khi Khi), and Hodges Tyron Garret Cobb (great grandchild), her sisters Val A. Hunt of Wallingford and Cynthia Denise Cobb of Williamsport, Pa, Sherry Smith of Chester, Evette Countee of Delaware, Waltina of Chester, Brennie Jones of Chichester, aunt Carol Minnor of Ft. Washington Md, niece Lisa Fleming (Big Bird), Nephew Chris Cobb ( Lil Chris), great niece/nephews Saleem Trader, Jala Fleming, and Hassan Cobb, her friends Bobbie Ann, Harper Girl, Bonnie Bon, Donna Don Hice, Tracey Johnson, Rosalie Smith, Charly Kennard, Elder Stephanie and Timothy Bridgeford, Godson Reggie Denise and Jermaine Kennard, lifelong friends/sisters Shereen Glascoe of NJ, Vidilia McDuffy & Greg McDuffy of NJ and a host of cousins, nieces, nephews and church family.

Barbara J. Johnson, affectionately known as &#8220;Mom Barb&#8221; went to be with the Lord Sunday, March 22, 2020. At the time of her death, she was a resident of Chester County, Parkesburg, where she had lived 25 years, with her loving husband,... View Obituary & Service Information

The family of Barbara J. Johnson created this Life Tributes page to make it easy to share your memories.