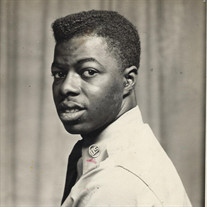 Gus’ Story On May 6, 1933, Thelma and Augustus R. Butler, Sr. celebrated the birth of their son, whom they named Augustus “Gus” Raiford Butler, Jr., born in Philadelphia, Pennsylvania. Gus, as he was affectionately known to many, attended Philadelphia Public Schools and graduated from Edward W. Bok High School. Gus confessed to the Lord at an early age. He was a member of the former Walters Avenue Baptist Church where, he attended and served for more than 50 years as Trustee Board member and treasurer, Deacon, Choir member, Sunday school teacher and even landscaper. In his later years, he attended First AME Church in Darby Township. Augustus enlisted into the United States Air Force and served during the Korean War Conflict, until honorably discharged. He then worked for the U.S. Postal Service until he retired. He spent time listening to jazz music and watching good western movies. Augustus met, fell in love with and married Mary Madeline Barnes whom, he shared his life with until her home going in June 2011. They celebrated more 60 years of life together and were blessed with a son, Brian and daughters Paula, Carol, Donna, Tracey and Nikki. At his earthly residence, Gus went home to the Lord for eternal rest on September 14, 2018 and was reunited with mother, father, grandparents and wife (Mary) whom preceded him in death. Those left to cherish his memory are: sister Claudine Chambers; children Brian, Paula, Carol, Donna, Tracey and Nikki; grandchildren Keith, William, Kevin, Cyril, Jamie, Damon, Demetrius, Antonio, Brian, Madison and Camren with many great-grandchildren; special friend, Mary Francis Green and a host of additional loving family and friends.

The family of Augustus R. Butler Jr. created this Life Tributes page to make it easy to share your memories.

Send flowers to the Butler family.