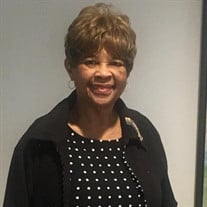 Sunrise: January 24, 1939 Sunset: May 4, 2020 Ardella Henrietta Green Woodburn went from labor to reward on Monday, May 4, 2020. She was born on January 24, 1939, at home during a snowstorm, in Philadelphia, Pennsylvania. Her parents were Manzella Taylor Green and Howard Davitch Green. She grew up in South and West Philadelphia and graduated from the West Philadelphia High School in June 1956. Her desire was to become a nurse. Unable to go to nursing school, she sought employment as an operating room technician at the University of Pennsylvania Hospital. She worked with the orthopedic surgeons for three years. Wanting to do more with her life, she joined the United States Navy (that’s right….A Navy Girl!) in 1959. She was a WAVE (Women Accepted for Volunteer Emergency Service) for three years. She met the love of her life, Norman Randolph Woodburn, in Navy school, in Chicago, Illinois. Three months later, on April 18, 1959, the two were united in holy matrimony. After Navy school was completed, the happy couple was transferred to the naval base in Portsmouth, Virginia. Two years later on August 27, 1961, they were blessed with the birth of their daughter, Dawn Michelle, at the U.S. Naval hospital. Ardella was then honorably discharged from the Navy, as was the custom at that time. Norman remained in the Navy for twenty two years. Shortly after their daughter’s birth, Norman was transferred to the St. Albans naval base in Long Island, New York. Ardella and Dawn remained in Virginia, until Navy housing was available. Norman visited them on weekends, whenever he could get a military hop. After a year’s time, the family was reunited in Navy housing in East Meadow, Long Island, New York. They resided there for nine years. On June 30, 1964, the happy couple was again blessed with the birth of a child. This time, it was a boy named Norman Howard Randolph. Ardella was a stay at home mom, while Norman worked in the Navy as a hospital corpsman Monday through Friday and as an Xray technician on the weekends at the St. Albans hospital. Ardella was active in the First Baptist Church of Hempstead under the leadership of Pastor Hayden. She was in the choir and taught Joy Club. She also made sure that her legacy was to introduce her children to Jesus Christ. Every Sunday, she got her children ready for Sunday School and church.They walked to the bus stop and took the bus to church. Norman worked on the weekends. After some time, Ardella was able to begin her greatest desire, by attending nursing school at Nassau Community College. She was unable to complete the program, due to Norman being transferred to his next duty station in East Weymouth, Massachusetts. While there, she began employment as a directory assistance operator. She also worked in a sheet metal factory. They moved to Navy housing the following year in South Weymouth. They remained in Massachusetts for five years. Norman was transferred to his last duty station (prior to retirement) at Dobbins Air Force base in Marrietta, Georgia. They were blessed to purchase their one and only home in East Point, Georgia in 1976. Ardella began employment as a nursing assistant at Georgia Baptist Hospital in Atlanta. After two years, she was finally able to resume her life long dream by entering nursing school at the Atlanta Area Technical School. She became an LPN (licensed Practical Nurse) in 1979. She was employed for ten years in the intensive care unit at South Fulton Hospital in East Point, prior to leaving to work for cardiologists at Metropolitan Cardiology of Atlanta. She was employed there for nineteen years and retired in 2005. When Norman retired in 2009, the two began to travel all over. They enjoyed a Mediterranean Cruise from Rome, to Spain, to France to Italy. They cruised the California coast wine country and took a bus trip to Chicago (where their love story began). Ardella was an active member of the Bowden Senior Center in East Point and a member of Ebenezer Baptist Church in Atlanta, home of Dr. Martin Luther King, Jr. Throughout her life, Ardella enjoyed sewing, knitting, crocheting, embroidery, cross stitch and cooking. She especially enjoyed baking desserts. But her greatest love was being a military wife, mom and Grammy. Her family meant everything to her. After residing in Georgia for forty two years, Norman and Ardella relocated to Wilmington, Delaware in December 2018. This was due to health issues and the need to be closer to most of the family. There new home was at HarborChase Assisted Living facility. Here, they were able to maintain an active, quality life style. Ardella was preceded in death by her parents Manzella and Howard, Green; a daughter-in-law Evette C. Woodburn, and a niece Darlene Y. Graves. She leaves to cherish her memory, a loving husband of sixty one years Norman R. Woodburn; a daughter Dawn M. Walker (Collin) of Wilmington, Delaware; a son Norman H.R. Woodburn of Riverdale, Georgia; two sister-in-laws Sharon Y. Askew (Jim) of Wilmington, Delaware and Eleanor J. Walker of Woodlyn, Pennsylvania; one granddaughter Brandi A. Woodburn; three Grandsons Roman A. Woodburn, Sean and Matthew Walker; cousins and a host of friends. Ardella’s beautiful smile and loving, caring ways will be greatly missed by her family and friends.

Sunrise: January 24, 1939 Sunset: May 4, 2020 Ardella Henrietta Green Woodburn went from labor to reward on Monday, May 4, 2020. She was born on January 24, 1939, at home during a snowstorm, in Philadelphia, Pennsylvania. Her parents were... View Obituary & Service Information

The family of Ardella G. Woodburn created this Life Tributes page to make it easy to share your memories.

Send flowers to the Woodburn family.