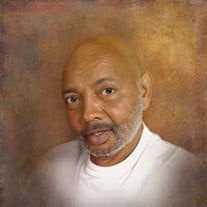 Angus Russell Everett, Jr., affectionately known as “Junior,” “Junebug,” and “Bug,” was born on August 29, 1951 in Chester, Pennsylvania to the late Angus Russell Everett Sr. and Sadie Mae Everett. He departed this life on Tuesday, June 15, 2021 at home. Angus was educated in the Chester Upland School District. At an early age, he learned the trade of bricklaying from his father and worked for the family business until later, he pursued a career in Information Technology and received a certificate in computer programming from the Computer Learning Center of Pennsylvania in 1989. He was an avid reader, especially books on African American history/culture which he enthusiastically shared with his grandchildren. He enjoyed watching sports; his knowledge of and love for the Sixers, in particular, truly highlighted his loyalty to the sports teams of Philadelphia. Above all else, Angus sincerely adored his family - truly cherishing the time spent with his three daughters and grandchildren whom he was notably proud of. “Junior ” took great pride in serving as a caregiver to his mother for many years before her passing. He constantly expressed the joy he felt being with those he adored the most. His family knew that as quick as he was to share his opinion with passion and drama, he would just as humbly offer support as well as a listening ear. Known for his humility and caring nature, his endless love and devotion to his family and friends was ever-present until his final moments. Angus was preceded in death by his parents Angus Everett Sr. and Sadie Mae Everett, brother Andre Everett, son Wali A. Everett, and a long time companion Ericka Gaffney. He leaves to cherish his memory, three beautiful daughters, Kywanna Dyton (Richard) New Castle, Delaware, Kamika Lynette Bell, Wilmington, Delaware, and Keia Bost, Bear, Delaware; four Grandchildren, Ahitya Johnson, Keshon Bush, Kyle Downs and Kalise Dyton; and one Great-Grandson Nathan Harlan Waters V.; three sisters, Joan Perry, Jean Everett, and Cheryl Sammons all of Chester, Pennsylvania; a beloved Aunt Nettie Martin of Philadelphia, Pennsylvania, a host of nieces, nephews, relatives; special friends Garland Davis, James Harris, Darrell Jones, and Rodney Smith; a special neighbor and spiritual mentor Alice Randolph, buddies at Matophos Hills, and friends. Join Zoom Meeting https://us02web.zoom.us/j/84735418678?pwd=bXJRejA0RC9kKzQ1WS9OaXExMVdFQT09

The family of Angus R. Everett Jr. created this Life Tributes page to make it easy to share your memories.

Send flowers to the Everett family.