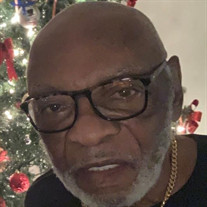 Adova Bolton jr age 81 of Newark Delaware very quietly and peacefully departed this Life.. early morning on March 28, 2022 .Adova was the second eldest of 3 children. Born in Lakeside Fla on Oct 18, 1940 to the late Mr.& Mrs. Adova Sr and Thelma Bolton. In 1946 Adova( aka) Dover & his parents moved from Fla to Chester pa. Dover attended the Chester public schools and graduated from Chester High School in 1958. Thereafter graduation Dover served in the U.S. Air Force. After his service in the Air Force Dover work at Baldt & Anchor inc for 20 + years as a crane operator .. Then on to the shipyard until the closing of both plants. In 1983 Dover began dating his beloved wife , Dolores Thorogood and married on September 1, 1989. Dover was a very dedicated husband, father, grandfather, great-grandfather to all who knew him , and a beloved freind as well. In 1986 Dover worked for the City of Chester as a Heavy Equipment Operator for 20 years until retiring in 2006. After only 6 months being retired Dover came out of retirement and worked for County Wide Transportation as a bus driver for disabled children until he retired for good in 2018. Dover was an avid sports fan( football was his favorite. Dover was also the life of the party, especially when bop music was played. No one could out bop him on the dance floor. Dover also loved Jazz, and often would attend jazz festival’s. Affectionally known as Poppop by all the kids in the family, friends of the family and even coaches , Dover was loved by all whom knew him. He had an hilarious personality and always made people laugh. Dover Loved his family dearly Always putting them before himself. Dover love the Lord.. At an early age Dover accepted Jesus Christ as his Lord and savior in which that became his life long support. Dover enjoyed family fun and laughter, especially at the bi-weekly family game nights, the yearly family vacations, attending grandsons basketball, football and baseball games as well as his granddaughters, gymnastics classes , swimming classes, taking his grandchildren to the park, libraries, summer day camps, just enjoying all family functions!! All after retirement!! Dover love the Hoildays, he went All out for Christmas , it was his favorite.. Dover’s love language was food Always cooking for the family and giving his grandchildren treats. Dover was predeceased by his parents Mr and Mrs Adova Sr and Thelma Bolton, 2 brothers Alexander and Alvin Bolton , Mother and father in law Mr & Mrs William jr and Betty Thorogood, 3 brother in-laws William and Jeffrey Thorogood and Vernon Reid. Dover is survive by his wife , Dolores Bolton, of Newark Delaware, a daughter Nicole Nichols of Upland Pa, a son Tyrone Thorogood (Aleida) of Claytmont Delaware, Bilal Nichols of Newark Delaware, (son/grandson) whom he raised , grandchildren Ne’Ajah Nichols, Trent and Tori Thorogood, great-grandchildren, Maxwell and Ahniya Nichols. 2 sister in law Deborah Reid of Upper Darby Pa, and Audrey Rice of New Castle Delaware, A brother in-law Michael Rice of New Castle Delaware. A special Nephew Charles Miller(CJ) and a host of nieces and nephews.

The family of Adova Bolton Jr. created this Life Tributes page to make it easy to share your memories.

Send flowers to the Bolton family.